The rainwater beer system developed between RainHarvest Systems and 5 Seasons Brewery turned out to be surprisingly successful as measured in several ways: The quality and crispness of the beer, the purity and softness of the water, the environmental responsibility and general excitement over rainwater beer has exceeded everyone's expectations. Several breweries, large and small from all over the country, have been working on their own rainwater beer systems as they learn more about the potential uses of locally captured rainwater for brewing beer and also for the water-intensive cleaning processes. So we've created this resource page for the followers who want to learn more about brewing beer with rainwater. In this section we'll provide all the information and resources you need to begin brewing your own beer from rainwater collected on-site. More analysis, articles, links and reviews will be provided as they become available.

The system, installed during August of 2009, employs 6 stages of filtration followed by dual-beam UV sterilization to remove various impurities and ensure safe, high-quality water. The filtered rainwater has a pH of 7.8, a hardness of 0.73 ppm, is colorless, odorless, has zero bacteria or other microbes and passes all EPA Standards with ease.

According to 5 Seasons Master Brewer, Crawford Moran, brewers prefer soft water without a lot of minerals for brewing high quality beer. Another beer aficionado who works as a food section columnist from an Atlanta newspaper says that the Golden Number Ale produced using rainwater was crisper and better tasting than previous batches he sampled made from tap water.

5 Seasons not only uses rainwater to brew all of their various beer but they also implement several other interesting and unique sustainable measures:

The installed system consists of the following components:


Links to information on the 5 Seasons Brewery rainwater collection system: 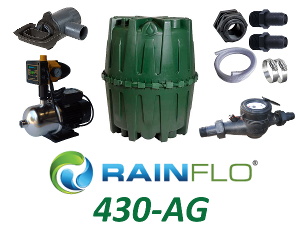 Simplify your project design and installation with a RainFlo complete system. The RainFlo 500AGS system arrives preconfigured with all items installed on the tank. Simply connect the included components to your downspout and connect the downspout and pump to the tank. The system is designed with premium components for optimal performance in residential or commercial applications, and includes water storage, filtration, pumping, and hardware.

RainFlo automatic 1/2 horsepower pumping system with durable and quiet performance up to 17.6 GPM and 34 PSI (max.)

Your Cart Is Empty 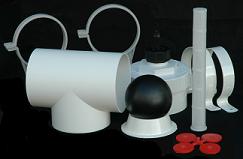 The Leaf Eater Advanced™ is the next generation Rain Head, featuring the new patented Clean Shield™ (single screen) technology and VH Pivot™ outlet. This model fits 3" and 4" round PVC pipe to the water collection tank.